A three-day event for the Aoos River in Konitsa

A three-day event for the Aoos River is organized by the “Pindos Perivallontiki” organization from September 22 to 24 in Konitsa.

On Thursday, September 22, at 18:00, in the event hall of the Municipality of Konitsa, the International Union for Conservation of Nature (IUCN), Pindos Perivallontiki and the Mediterranean Institute for Nature and Man (MedINA), will hold an event in which present the results of the scientific studies prepared in 2022 by the IUCN for the Aoos river.

The theme of the open event is: “Proposal to protect the natural and cultural heritage of the Aoos River, the last free-flowing river in Europe”.

On September 23, a boating event on the Aoos River is planned with the participation of organizations from Greece and Albania. The boating will start from Konitsa and will end in Premet, Albania.

On Saturday September 24th, the 3rd The Home River BioBlitz-Exploring life on the Aoos will take place. BioBlitz is a team effort to record the species of an area within a set time frame. It is an attempt to collect data for the scientific community from ordinary citizens.

The appointment has been set for 10 in the morning, at the Konitsa Bridge.

On Saturday September 24, at 20:00, there will be a concert for Aoos-Vjosa with Giorgos Gakis and the Troublemakers from Ioannina and the Urban Band from Albania, in the central square of Konitsa, with free entry.

The three days of events are part of the implementation of the program “Saving Europe’s Last Free Flowing Wild River Vjosa-Aoos”, with the aim of preventing the construction of dams in Greece and Albania and the creation of the first cross-border national “Aoou-Vjosa” park in Europe. The partners involved in the project are: Ecoalbania, EuroNatur, RiverWatch, IUCN ECARO, MedINA, Tour du Valat and Pindos Environment. 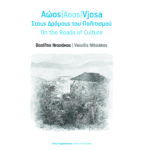 Previous Story:
V. Nitsiakos-Aoos/Vjosa, on the roads of culture