Action for the creation of an Aoos / Vjosa transnational park

The “Pindos Perivallontiki” organization sent from Ioannina its own message in favor of the creation of the Aoos-Vjosa transnational park. “Pindos Perivallontiki” in collaboration with the Mediterranean Institute for Nature and Anthropos and the Citizens’ Movement for the Protection of the Aoos River “Protect Aoos” unfolded on 29th September 2021 cloth sails with the message “Aoos-Vjosa Transnational Park Now” on the pavement of the square Mavili, next to the lake and the Castle of Ioannina.

“This is an awareness campaign that seeks to highlight the importance of protecting the Aoos River. It is an action that has taken place in many countries with emblematic buildings in the background. Its philosophy is that as we preserve our cultural monuments, in the same way we must “We also want to preserve our natural wealth. The aim is to keep the Aoos River free of dams and unnecessary, artificial barriers,” said Tonia Galani, the organisation’s environmental program coordinator.

This action was taken in the framework of the program “Saving Europe’s Last free flowing river Vjosa-Aoos”, which is implemented in cooperation with international partners. The Aoos / Vjosa River flows in the cross-border area between Greece and Albania and is one of the last free and wild rivers in Europe. It is a haven for many species that have been lost or threatened in other parts of Europe. With the exception of the dam at Aoos Springs, the river is “free”. However, the threat to the construction of hydroelectric projects is constantly present. The possibility of implementing the various dam plans will interrupt the natural flow of the river and the functions of its living organisms. In recent years, an international campaign has been launched to create a Vjosa-Aoos transnational park, with the participation of environmental organizations from both Greece and Albania. 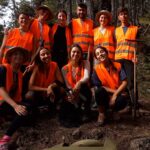 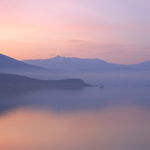