For the 7th consecutive year, the established mountain biking race “ProtectAoos” mtbultra 2019 was organized on September 1st in Vovousa, whose main motto is to protect Aoos from the construction of dams and interventions that will irreparably alter the river. “PINDOS PERIVALLONTIKI” was a strong supporter of the event, strengthening it financially, and contributing the most, with its human resources and equipment in the cleaning and marking of all the routes of the race. At the same time, in the framework of the implementation of the program “Rescuing the last free flowing wild river – Vjosa/ Aoos”, “Pindos Perivallontiki” highlighted and included this year, the struggles of the people of Vovousa, within a pan-Balkan network of organizations “SAVE BLUE HEART OF EUROPE ”Who have joined forces to protect the rivers of the Balkans from the construction of dams and hydroelectric projects, bringing the sporting event to the international forefront and informing the international community about the chronic struggles of the inhabitants for an Aoos free from dams and interventions.
The participants and athletes who took part in the event had the opportunity to learn about the cultural and ecological importance of this cross-border river, as well as the threats it faces not only within the Greek borders but also within Albania. Aoos shares its route between Greece and Albania, creating for 272km a system of valuable habitats and ecosystems that contribute uniquely to the “bank” of biodiversity of the European Continent.
As with most rivers, for Aoos, hydroelectric power is the biggest threat, as such interventions are capable of destroying in a few days all this ecosystem complexity that took centuries to create. In Albania, Vjosa is the border for many protected areas, but the river itself does not have a special protection status. The absence of a comprehensive, bilateral management plan between the two countries for its entire catchment area has paved the way for investors to proceed with plans to build hydropower projects in both countries.
In the face of this threat, we must understand that both countries need to work together to protect our common good through the establishment of an Aoos-Vjosa Transnational National Park, which will ensure the protection of the river from its sources to its estuary. in Albania, will be the first Transnational National Park of its kind in all of Europe, focusing on the need to protect and conserve this unique river ecosystem.
“Pindos Environmental” will continue to defend the rights of the river and to support the actions of the inhabitants of the Aoos valley, strengthening with its forces the struggle for the obvious: the preservation of our natural wealth and the protection of our natural heritage.
We thank the athletes and those who contributed to the realization of this race! We hope that next year he will find us united again around the river, to fight around an Aoos free from dams and interventions! 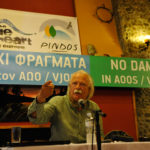 Previous Story:
AOOS RIVER: SAVE THE BLUE HEART OF EUROPE 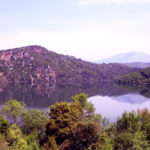