It is a small bare mountain at an altitude of 462 meters, part of which is a national monument dedicated to the memory of women in the area who fell from the steep cliffs, so as not to be captured by the Turks during the Turkish occupation in Greece. In remembrance of this event has been built at their point of fall. The area includes a limited forest zone, steep cliffs, cultivated land and is heavily grazed. The part below the monument has been reforested with prickly pine (Pinus brutia). Scattered individuals of downy oak (Quercus pubescens) and cypress (Cupressus sempervirens) grow there. On the way to the monument there is a sporadic appearance of the long-haired oak (Quercus macrolepis). Regarding the herbaceous flora, two endemic species of the Greek (Galium advenum) and the Balkan (Saxifraga rotundifolia) flora have been reported respectively. As far as fauna is concerned, there is evidence only for the avifauna of the area and mainly for the predators that live in the rocky habitats of the area as well as for a species of reptile, the snake Vipera ammodytes which is mentioned in the species list of the Berne Convention.

It is obvious that the extensive human activity in all its forms (logging, intensive grazing, fires, hunting, animal husbandry, tourism) has negatively affected both the flora and fauna of the area, altering and / or destroying the natural habitats. In the whole area of the mountain are clear traces of overgrazing and older fires. 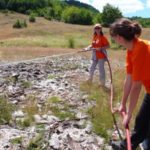