Amvrakikos Gulf is located on the west coast of Greece, between Epirus and Central Greece and between the prefectures of Etoloakarnania, Arta and Preveza. It is the northernmost large bay of Western Greece and its borders are: Mount Makrinoros to the east, the plain of Arta to the north, the northern foothills of the Akarnanian Mountains, where the individual plains of Vonitsa and the Forest to the south and finally the peninsula are formed. Preveza which separates the bay from the Ionian Sea to the west (ELKETHE, 1989).

Amvrakikos gulf is a shallow (depth <65 m) and semi-enclosed sea area, with intense diversity in the maritime division and slow rate of water renewal which communicates with the open sea of the Ionian Sea through a narrow (600m wide) and shallow canal m depth, including an artificial navigation channel (Kapsimalis et al., 2005). The greatest depth of the bay is located in its eastern part and is estimated at 63 m.

The Amvrakikos gulf receives fresh water from many rivers and streams, the most important suppliers of which are the rivers Louros and Arachthos. Both Arachthos, with an average calculated water supply of 68 m3 / sec, and Louros with 19.4 m3 / sec (PPC measurements 1951-1988) flow at the northern end of the bay, creating a common delta valley of 350 Km2 (Mertzanis, 1992 ). The uneven surface capacity of the Louros and Arachthos rivers in relation to the geomorphology of the basin created the peculiar landscape of the Amvrakikos, the shallow lagoons that dominate in the northwest of the region and the double delta of the Louros and Arachthos rivers.

More information on the official site of the Management Body of Amvrakikos Gulf: https://www.amvrakikos.eu/ 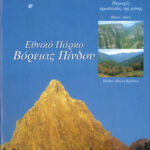