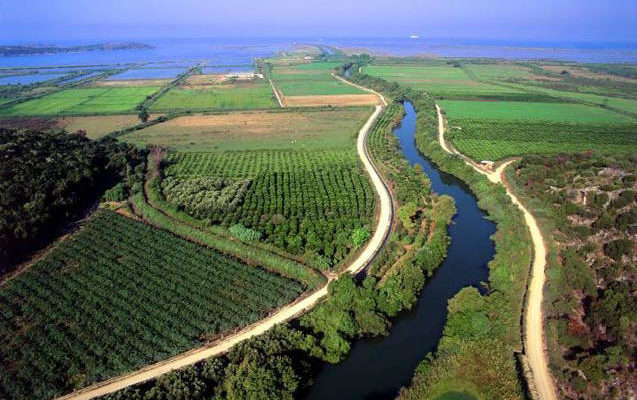 Estuaries and stena of Acheron
The river Acheron springs from the mountains of the Prefecture of Ioannina and after a route of 64 km flows into the Ionian Sea, creating a number of ecosystems that host many species of animals and plants. The river crosses the valley formed between the mountains of the Western Epirus and near the village of Trikastro (on the borders of the Prefectures of Ioannina, Preveza and Thesprotia), enters a narrow and imposing gorge formed by the mountains of Parachenta and Souliou ) from where it exits near the village of Gliki. Then it enters the plain of Fanari, where it forms a delta during its estuary (Acheron estuary) in the bay of Ammoudia. West of this area, in the northwestern coastal part of the Prefecture of Preveza are the estuary of the river Acheron known from mythology. The river Acheron flows into the Ionian Sea, in Ormos Fanari (Ammoudia). It is an area with special natural features, such as marshy areas, coves with sand dunes, beautiful coastal ecosystems with steep rock formations covered with pine forest, which give it a landscape of special biological and aesthetic value.

Stena of Kalama
Between the eastern slopes of Mounts Revela and Lefkes of the Municipality of Filiates and the western slopes of Mounts Sideris, Koutsouveli, Soumala of the Municipality of Paramythia of the Prefecture of Thesprotia, is the gorge, which crosses the river Kalamas. This part of the river with its steep mountain slopes, is the protected area of ​​the Straits of Kalamas. It is a landscape of unique aesthetic value, with a strong sense of isolation, with vertical rocky cliffs, between which flows the river with meanders, inaccessible caves on the slopes and an important zone of riparian vegetation.

Kalama Delta
Just a few kilometers from the border with Albania, on the shores of the Ionian Sea is one of the most important wetlands in Western Greece and Europe. It is the Delta of the river Kalamas that includes the estuary of its old and new riverbed, the lagoons Riho, Vatatsa, Loutsa Papadia, Vontas etc., the swampy formations around them and the land fertile area that has been created over the years by the deposits of the river. The protected area of ​​the Kalamas Delta amounts to 8,531 hectares. The altitude of the flat deltaic areas ranges from 0-12m., While in them rise high hills in the form of islands, mainly the Black Mountain (or mountain of Kestrini, 509m. Altitude) and Mastilitsa, but also other smaller ones.

Marshes of Kalodiki
At the southern end of the Prefecture of Thesprotia, on the borders with the Prefecture of Preveza and on a plateau created at an altitude of 100m. approximately between the mountains of Parga in the west and the mountain range of Margariti in the east, the lake area that forms the Marshes of Kalodiki was created. The water level of the swamp, as well as its physiognomy due to the vegetation varies between the seasons of the year. Kalodiki marshes is one of the important and special wetlands in Greece which is a unique formation of peat-soil area with great ecological and special aesthetic value.

Its importance follows both the bird fauna that it hosts due to its geographical location (located on the western migration route and is an integral part of the network of migratory bird stations in Western Greece), as well as its natural characteristics (freshwater swamp, rich vegetation with water lilies , etc.). At the time of flowering of water lilies (Nymphea alba), early summer, the appearance of the swamp is unique.

More information on the official Website of the Kalamas Management Agency: https://kalamas-acherontas.gr/ 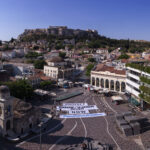