“Aoos/Vjosa: On the roads of culture” by Vassilis Nitsiakos and “The gift of the moon” by Kostas Tziovas.

The Aoos/Vjosa River, spanning the transboundary area of Greece and Albania, “accompanies” or expresses the existence and the metamorphosis of entire societies.

It’s not just a river. It is a Locus, Culture, Nature and People. It is an ecosystem thanks to which the local communities created their culture and made an identity which determines not only the ongoing interaction between people and environment but the landscape dynamics as well.

In the book “Aoos/Vjosa: On the roads of culture”, the professor of the Department of History & Archaeology of the University of Ioannina, Vassilis Nitsiakos, is introducing to us the local communities like Metsovo, Zagori and Konitsa and cultures which Aoos unites. The Aoos/Vjosa remains one of Europe’s last free-flowing wild rivers (with the exception of the dam in the sources of Aoos). It is and should remain a last free flowing wild river.

This book attempts a “trip” to the Aoos villages, to their characteristics and particularities, the music, the tradition, the sounds, the monuments, the nature elements which carved the people’s soul of this locus, on the roads of culture.

Like all rivers, the Aoos is not merely a riverbed flowing with cubic metres of water, but an entire ecosystem from its springs in the mountains to its estuary. Still more, the Aoos is not merely an entire and unique ecosystem (as has been scientifically documented) but also an important element in human geography, in the cultures that have emerged along its course. Historically the Aoos has been one of the most important East-West routes, used by armies, merchants’ caravans, transhumant shepherds and others. Together with this movement, elements of culture were dispersed from place to place, and important syntheses occurred in local communities and in the cultures that developed in the river valleys, all thanks to the river.

The Aoos, therefore, is considered as an important cultural asset.

“The gift of the moon” by Kostas Tziovas, is an illustrated story about Aooss, a fairy tale. As the writer notes: “This story would leave our mother’s mouth as naturally as a deep breath or a sigh of compassion, but as a charm, too, ‘so no such evil would befall us’, every August when all the women of the village set off for the river, young and old alike, to together clean and wash their clock rugs, carpets and clothes as the full moon drew near, so they’ d be ready for the heavy winter that always set in early in those parts, there up close to Saint Dimitris”.

A mouth to mouth story…  A story which reminds that the water cannot be stopped, cannot be divided. However hard men may try, it will find its way. Pouring into subterranean passages and sink holes, it will find new routes and pour forth once more into the light of day before it joins the sea.

The illustration of the story has been done by Ioanna Boulougari.

Besides the printed edition, there is a cd with the storyteller Virginia Kokkinou narrating “The gift of the moon”. 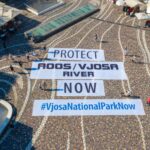 Previous Story:
The fights against the dams of Aoos River 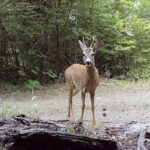 Next Story:
Flora and fauna in Aoos River