Flora and fauna in Aoos River

What does biodiversity mean? In brief, the term “biodiversity” refers to the different kinds of life you will find in an area.

Biodiversity loss is threatening the benefits nature provides to people. These benefits are various such as production of food and pharmaceutical substances, climate regulation, maintaining soil fertility.  All these benefits help us to adjust to climate change affecting the natural ecosystem and to moderate its effects.

Every ecosystem is more stable and health when it concludes the maximum gene pool of species existing in an area, meaning the maximum biodiversity. If even more species inside the ecosystem start to disappear, then the whole ecosystem is in a danger.

The Aoos ecosystem was lucky enough to go on without large mad-made interventions. The good condition of the river makes it a role model for the ecological restoration of other rivers in Europe, according to the new EU Biodiversity Strategy.

The largest part of the Aoos river basin is located within the North Pindos National Park. The section of the river after Konitsa, as well as its tributaries, are not subject to any protection regime yet.

The Northern Pindos National Park hosts more than 2000 flora species. Some of them, are really impressive, like the wild lily and the orchidaceae.

There are various medical herbs and plants, such as the mint, the willowherb, the mountain tea, the thyme etc. The National Park hosts a large number of rare, endemic and endangered species. Also, several hundreds of fungi species are found in the area.

Of undeniable ecological value are the black pine forests which cover a large area of the Park, the canyon forests with basswoods and maples, the forests with foetid junipers and other tree species.

The value of forest biodiversity is underlined by the so called “sacred forests” of Zagori and Konitsa. The communities look after sacred forests as protected areas. The sacred forests are sites where chopping trees is forbidden and where it is feared that cutting down their branches can result in supernatural punishments. In most cases, sacred forests are not church property but communal or public land. Even so, the inhabitants of the communities recognise the Church as their customary manager

These forests are often related to the natural resources that the community conserves, because they are important for its survival. Even more often, they are forests that protect the villages from natural disaster.

The “sacred forests” of Zagori and Konitsa are classified as Sacred Natural Sites, important both for cultural diversity and biodiversity. They were also inscribed on the National Inventory of Intangilbe Cultural Heritage in 2014.

The Northern Pindos National Park is an important habitat for a great number of species, among which many are endangered and protected by national law. The area hosts about 60 species of mammals

The fauna is a significant chapter for biodiversity.

The Aoos River basin, protected or not, hosts a great number of species. There are recorded 12 different species of wild mammals. Concerning the large mammals, is recorded the presence of the brown bear, wolf, Balkan chamois, roe deer and wild boar. As for the small mammals, badger, wild cat, ferret, fox, hare, squirrel and hedgehog are present.

Also there is the otter. The otter, a carnivorous and nocturnal species, is well adapted to its aquatic existence.

Another species which its life is depending on the water, is the Odonata or dragon fly. The Odonata are considered to be bio-indicators of water quality in aquatic ecosystems.

Almost the 1/3 of the known Odonata in Greece was found in the Aoos River.

Birds like the Egyptian Vulture, and reptiles coexist in the area.

The Aoos Rivers and its tributaries are a habitat for endemic fish species like the European eel and the Pindovinos (Oxynoemacheilus pindus).

The huge wealth of Aoos exists thanks to the few man made interventions. The Aoos River is exceptional at international level. All its important tributaries are almost intact. This situation creates a unique network of rivers and streams that burst with life. The Aoos River should remain a healthy and “alive” river, a free flowing river, a habitat for many species. 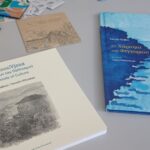