AOOS RIVER: SAVE THE BLUE HEART OF EUROPE

With the participation of the inhabitants of Vovousa and the surrounding area from Metsovo and Greveniti to Konitsa, Distrato, Perivoli and Avdella was held on Friday, July 19, in Vovousa, in the shelter “VALIA KALDA” event entitled “UNIT T WATER CULTURES FOR THE PROTECTION OF AOO-VJOSA “.
The event was organized on the initiative of “PINDOS ENVIRONMENTAL”, in the framework of the Vovousa Festival and was dedicated to the joint effort of Greek, Albanian and European environmental organizations, citizens and organizations against diversion plans or the construction of dams in Greece and the river A on the river.
“We can not talk about our relationship with nature, ignoring society” and “we should not treat things in a dichotomy, on the one hand Nature and on the other Man, but as a unit. Man in Nature and Nature as a part – extension of Man “, stressed in his speech the professor of Social Folklore at the Department of History and Archeology of the University of Ioannina, Vassilis Nitsiakos.

Through this perception of political ecology – as he stressed – Mr. Nitsiakos approached the issue and spoke about the various cultures that developed along the river Aoos and which emerged as a result of this continuous unity and “conversation” of Water. with Man.
Through this continuous and uninterrupted relationship between River and Man, the “culture of Stani” was born in the alpine livestock meadows, the “culture of Wood” lower in the forest villages of the basin, as well as the “culture of Petra” in the villages of Lakka of Aoos and in Mastorochoria of Konitsa “, he noted characteristically that” if we are deprived of the river, we will be deprived of all these special cultures that have developed and continue to develop along it. The river is multilingual and multicultural and we are not just talking about cubic meters of water. “If we are deprived of the river, we will be deprived not only of the ecosystem and biodiversity but also of cultural diversity, and that should not happen.”
The guests were welcomed on behalf of “PINDOS PERIVALONTIKI” by Mr. Costas Tziovas who referred to the campaign “SAVE THE BLUE HEART OF EUROPE” which aims to protect and preserve the river Aoos (and other important rivers in the Balkans) dams and hydroelectric projects. The Aoos-Vjosa River is one of the last wild rivers in Europe, flowing free for the most part as it flows into the Adriatic. The participants in the event were informed about the need to create an Aoos-Vjosa Transnational National Park, which will ensure the protection of the river from its sources to its estuary in Albania and will be the first of its kind Transnational National Park in Europe. focusing on the need to protect and conserve this unique river ecosystem.
On the Albanian side, the Director of Protected Areas of the Ministry of Environment of Albania, Mr. Zamir Dedej, as well as the Head of Argyrokastro, Mr. Astrit Aliae, participated. Also present was the Mayor of Zagori, Mr. Vassilis Spyrou, who welcomed both the event and the initiative for the protection of the River.
This was followed by a party with two music companies from Greece and Albania where the participants had the opportunity to understand the cultural interaction through the traditional music of the Aoos river basin. 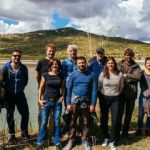 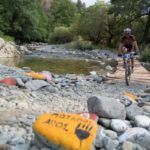